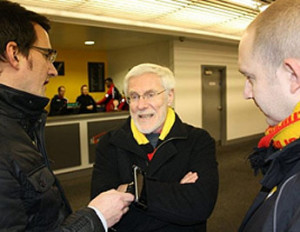 Much has happened over the past few weeks since we issued our statement outlining our initial concerns and the subsequent positive response from the club’s new owners. The Supporters Trust remains a critical friend and will not hesitate to question decisions that we feel might be detrimental to the future of the club. The new owners and management team have been both open and positive in our conversations to date. I have had several discussions and am in regular contact with them. My experience has been very different from our immediate past encounters and the philosophy of the new owners seems appropriate for a club of our size and financial position.

The financial situation at the club was such that these have been introduced more quickly than had been anticipated initially.

Many changes have happened in recent weeks. The financial situation at the club was such that these have been introduced more quickly than had been anticipated initially. However, at least the financial stability of the club has been assured in the short-term and I believe also in the long-term. From the information received by the Trust’s Board it would seem that we have had a lucky escape and we look forward to the prudent and sensible business plan that is being put in place.

There has been dismay expressed by many fans at this week’s decision not to pursue category 1 status for the Harefield Academy under the Premier League’s Elite Player Performance Plan (EPPP). In conversations with Gian Luca Nani and Scott Duxbury this week, I have been assured that this does not signal a change in the importance of the academy to the club. However, it does reflect a reality check regarding the onerous conditions and significant costs of achieving category 1 status, which was not guaranteed in any case. For a club that has lost money consistently for years the management team believed the cost commitments of maintaining category 1 status to be onerous. While the club may lose potential recruits to other academies, the opportunities for early first team involvement remain a very strong selling point for young players. As a result, we expect our U21 players to be pushing for a first team place rather than playing in the U21 league being established under the EPPP. While our Academy teams will not be playing regularly against the top opposition, there will be opportunities to work around this (for example by arranging friendlies). Of course, in future if there are benefits in seeking a higher category registration then this is still open to the club.

While a significant number of new recruits have arrived this summer, I have been assured this is based on financial sustainability. While the current squad will almost certainly need to be slimmed down to maintain this sustainability, the Trust’s concern that the club would simply become a feeder club for others has not been realised so far. The new recruits do indeed bring increased skill and experience which we hope will be a help to our home-grown youngsters. Achieving greater financial sustainability will reduce the need to quickly sell players to fund running costs, as happened with Marvin Sordell last year.

While Gianfranco Zola remains unproven in the Championship he is a good coach and clearly has the confidence of the players. He will need time to get the team to where it needs to be (just like any manager) and he will need to adapt as he learns about the Championship. However, at least the club has greater resources available than before and that has to bode well for the future.

We all wish Gianfranco Zola and his squad the best of luck against Crystal Palace and through the season.